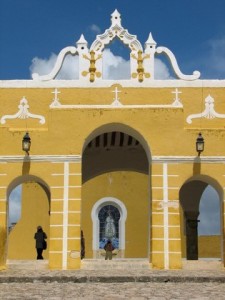 Known as the “Yellow City,” Izamal may be  the oldest colonial settlement in Yucatán state, located only 45 minutes from the capital, Mérida.

It was founded in early 16th century, atop the pre-existing Mayan city of Izamal. As was the strategy of Spanish conquest, temples and buildings were destroyed, and a colonial township constructed from the ruins. Izamal had been an important ceremonial site for the indigenous, so perhaps, exploiting an existing inclination to worship in the area; Franciscan monks bestowed Izamal with a religious distinction. A large monastery was built from the decapitated temple of Ppapp-Hol-Chac. To this day, Izamal remains an important center of Catholic faith. In 1993, it received a visit from Pope John Paul II – an event that exposed Izamal to the international world.

Its reputation as a city ‘almost entirely painted in mustard yellow’ is what compels most visitors to Izamal. Whether it be the entire façade, or a part of a decorative motif, few buildings have not conformed to this unique colour scheme. With the advantage of a well-preserved historic center, it’s refreshing to escape the bustle of Mérida and stroll along its cobbled streets. Incandescent in the afternoon, Izamal is most charming in the evening, when the historic center glows in the streetlight like a 1920s film-set.

Ascending from the main plaza, the stone stairway leads into “Convento de San Antonio de Padua” – among the oldest monasteries in the Americas. Its arcaded walls tower over the plaza. Construction of the monastery began in 1533, supervised by Diego de Landa, the Franciscan monk infamous for his brutality in evangelising the Maya. Still, on the floors under the arcades, it’s possible to see one or two stones embellished with Mayan iconography. Flanking the courtyard is the principle church, “Santuario de la Virgen de Izamal.” Its second floor houses the statue of “Our Lady of Izamal,” Patron Saint of Yucatán.

The green hills beyond are in fact unexcavated ruins. Before the arrival of conquistadors, Izamal was a large and important pre-Colombian city in northern Yucatán – revered as the home of Kinich Kakmó, the sun god, and Itzamná, the creator deity. There are several archaeological sites around the city. But, Kinich-Kakmó on Calle 27, north of the convent, is the most impressive. Visitors can still climb to the top – an increasing rarity for Mayan ruins. From its summit, there is an expansive view of Izamal and beyond.

For a glimpse into contemporary Mexican culture, particularly its art, visit “Centro Cultural y Artesanal” gallery, on the main plaza. It comprises an intriguing collection of folk art from across Mexico. Housed in a restored colonial house, it’s also a pleasure to admire the architecture around the exhibitions. There is a well-stocked gift shop, selling local textiles, handcrafts and jewellery, and even a spa. “El Museo de la Comunidad,” Izamal’s community museum is below the east side of the Convent.

To eat while you’re there, “Kinich” on Calle 27, near the entrance for Kinich-Kakmó, offers tasty Yucatán fare. Its dining area in the leafy courtyard is a pleasant setting for dinner. Also, “Los Portales” on Calle 33, at the corner of the convent, is a good choice. Prices are reasonable (plates average $4USD), and its large windows open to an intriguing view of life on the Plaza. 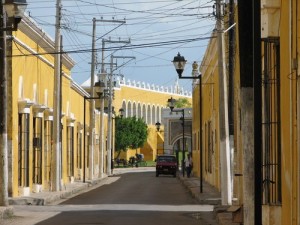 Most people visit Izamal in a day-trip from either Mérida or Valladolid, though there are several hotels around the city. “San Miguel Arcángel” on Calle 31A is a prime location, offering rooms with balconies overlooking the main plaza. Rates are around $50USD, which includes a continental breakfast. While “Mancan ché” on Calle 22, four blocks from the convent, is a quieter option. However, if you decide not to spend the night, plan to stay until the evening. From 8:30pm, Monday through Saturday, there is a light and sound show in the Convent. Entrance is around $4USD.

Ron is the consummate professional and an incredible resource to have for all-things-Tulum and the surrounding areas.  Ron’s in-depth knowledge of, and caring ways for, this magnificent region of Mexico is second-to-none.  If you’re seeking vacation or travel advice for things such as lodging/hospitality/spa’s, restaurants, shopping, beaches, sports/fitness, adventure day-trips to the nearby ruins/fishing/boating/diving/snorkeling/cenotes/zip-lining, 4-wheeling, etc., or need more in-dep… END_OF_DOCUMENT_TOKEN_TO_BE_REPLACED

Ron Burdine made this whole move from Philadelphia possible..their knowledge and organization skills (that I don’t have) helped me create order out of my chaos..there are a million details that are just too much for one person to put in order. At least this one person. We followed Ron’s suggestions and had the secure feeling that we were ready for anything, and we were.. we had insurance, directions, hints, tips and suggestions..we have been here (Isla Mujeres) for 6 weeks and Ron is still o… END_OF_DOCUMENT_TOKEN_TO_BE_REPLACED