Average Lifestyle rating: C (range from D- to A-)

At the tip of the Yucatan Peninsula on the “Flamingo Coast” is a string of small fishing communities.  Beginning at Chuburna and running east on Carreterra 27 for about 50 kilometers to Telchac Puerto, these villages vary in size and modernity.  Progreso, largest of them, has a population of a little over 37,000 and is the state’s main port. It hosts cruise ships twice a week at the “longest pier in the world” and has a burgeoning community of local artistsans, specialty shops and trendy restaurants lining the mile-long malecon. However, the overall ambience remains that of an quiet, country town.

To the west are Chelem and Chuburna, which have pretty much remained fishing villages, albeit ones with gringos in them.  Immediately to the east is Chicxulub (cheek shoo loob) Puerto, another fishing village, but one with it’s own pier (and sight of the geographical anomaly, the Chicxulub Crater believed to have been caused by a meteor hitting the earth).  There is no stopping point between Progreso and Chicxulub – they form a single entity, unless you happen to know that one starts and the other stops at the Oxxo on Calle 27.

Beyond Chicxulub, comes a string of essentially “beach house” communities, all the way to Telchac Puerto.  In the Uaymitun (why me toon), San Benito and San Bruno areas and on into Telchac Puerto, the beach houses of wealthier people from other parts of Mexico (primarily Merida) line up between the highway and the ocean like soldiers ready for drill.  The original villages are still there, but they are dwarfed into insignificance by the parade of summer homes and condos.  These homes are, for the most part, large and modern and can be had relatively cheaply with one exception – the families that own them like to use them for the months of July and August when the heat and humidity run them out of Merida. It is possible to rent them in July and August, too, but the monthly rent is exorbitant at two-three times the normal monthly rate.

The eco-tourism trade is building in the Progreso Corridor, and there are several eco-parks in the area.  Rio Largatos and Alacranes Reef being two of the larger ones, but there are small flamingo sanctuaries that dot the highway in both directions.  The Celestun Biosphere Reserve takes up much of the western part of the state that runs about half-way down the western side of the peninsula. There are also many Mayan ruins and cenotes within “day trip” distance.

Beach houses are plentiful and always looking for renters and can be had from $550 to $1500 per month (except for July and August); however, they all have the “summer” drawback of being used by their owners, or with rent that expands exponentially with the heat.  Rents, off the beach, run from $350 per month up.  The local mercado in Progreso is large and provides many options for fresh produce, meat, fish, fresh-squeezed juice, clothes and lunch counters.  And, when the cruise ships are in, the popular Artisan Bazaar is open with a cornucopia of products made locally.  In fact, the city is building another area for a second artist’s market now.

There are a several small department stores in Centro, along with banks and the San 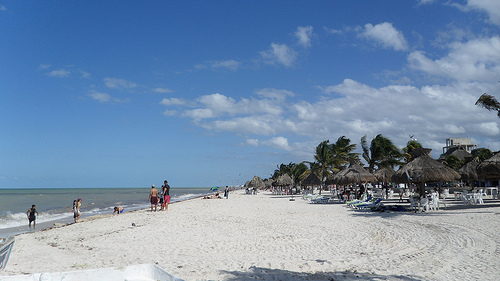 Francisco grocery store.  Walmart has a large subsidiary store at the crossroads on the southside called Bodega Aurrera where you can buy food, household goods, toys, TVs – all the things you expect to get from a Walmart.  However, since this is a poorer area, the quality of the products sold is not high – for the quality stuff, you’ll need a trip to Merida. But, you can count on a trip to Merida once or twice a month anyway, where your shopping options are virtually unlimited.

Progreso has the emergency service of the Mexican Red Cross, one public Health Center, Centro de Salud, and the Centro Médico Americano, a private institution and Enfermería Naval (which does accept civilians with emergency medical situations). All facilities provide medical services 24/7.  There is also a clinic for those insured by IMSS and ISSSTE.  In addition, there are many doctors, dentists, opticians and pharmacies in the Progreso area, and more hospitals, doctors and dentists, etc. in nearby Merida.

There is an airport in Merida, too. However, the Merida Airport flights are limited and only go to Houston and Los Angeles.  For the full-service airport in Cancun, you can opt to take the bus (a four to five hour ride), or drive three hours to Cancun International rather than pay the high cost of the hour’s flight from Merida to Cancun (which rivals the cost of the international flights in and out of Cancun).

Looking for “low-key” on the beach.  Look no further than the Progreso Corridor.

Ron is the consummate professional and an incredible resource to have for all-things-Tulum and the surrounding areas.  Ron’s in-depth knowledge of, and caring ways for, this magnificent region of Mexico is second-to-none.  If you’re seeking vacation or travel advice for things such as lodging/hospitality/spa’s, restaurants, shopping, beaches, sports/fitness, adventure day-trips to the nearby ruins/fishing/boating/diving/snorkeling/cenotes/zip-lining, 4-wheeling, etc., or need more in-dep… END_OF_DOCUMENT_TOKEN_TO_BE_REPLACED

Ron Burdine made this whole move from Philadelphia possible..their knowledge and organization skills (that I don’t have) helped me create order out of my chaos..there are a million details that are just too much for one person to put in order. At least this one person. We followed Ron’s suggestions and had the secure feeling that we were ready for anything, and we were.. we had insurance, directions, hints, tips and suggestions..we have been here (Isla Mujeres) for 6 weeks and Ron is still o… END_OF_DOCUMENT_TOKEN_TO_BE_REPLACED