The ancient city of Palenque (pa-lenn-KAY) is like no place on earth. Clutching the foothills of the Sierra Madre de Chiapas, where the sultry tropical air gently reverberates sounds of the jungle like a slow-beating ceremonial drum, Palenque’s elegant structures have allured visitors from across the ages. One such figure was Count Jean-Frédérick Waldeck, an eccentric explorer of the 19th century. Waldeck arrived in Palenque in 1832, after traversing treacherous terrain from Mexico City in search of the mysterious Yucatán Peninsula. Enamoured at first sight, he curiously took up residence in one of its temples, now aptly named the “Temple of the Count,” where he spent two years drawing fantastical illustrations in which he linked Palenque to the “lost city of Atlantis.”

Located in the north of the southeastern state of Chiapas, this archeological site is approximately eight kilometers from the modern town of Palenque. If you continue south, the road meanders, chillingly, up the mountain range, which soars to heights of 2,200 meters, and into the cool plateau of Los Altos (the highlands), where you’ll find the cultured colonial city of San Cristóbal de las Casas. To the north are the humid plains of Tabasco and the Gulf of Mexico. 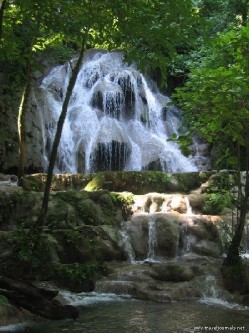 There are several theories as to why the ancient Maya decided to build on such a sodden escarpment, surrounded by steep slopes and sudden drops, (though, the modern-day site is fortunately less hazardous). Archeologist Kirk D. French believes they may have considered it sacred. Woven with streams, springs and spectacular cascades thundering down the mountains, this luscious slice of rainforest manifests the spot of creation described in Popol Vuh, the collection of mytho-historical tales told by the K’iche’ Maya of the Guatemala highlands. Though with such an abundance of water, it’s no myth why this land is fertile. The location also offered Palenque the strategic advantage of defense, at least in theory, since it suffered two devastating attacks from Calakmul in A.D. 599 and 611. Nevertheless, intruders from the south, east and west could easily be seen clambering down the mountains, while panoramic views over the lowlands made it possible to spot those advancing from the north.

Palenque rose to domination in the Late Classic period (A.D. 600 – 800), most notably under the reign of revered ruler, K’inich Janaab’ Pakal (or Pakal the Great), who ascended the throne in A.D. 615 at the tender age of 12 years old. Its ancient name was Lakamha meaning “Big Water,” though it was tagged Palenque by Spanish Franciscan, Pedro Lorenzo de la Nada, who arrived in the region in 1560. Palenque, which is Spanish for “fortification,” was a translation from Otolum, meaning “strong houses,” its contemporary name among the local Maya.

It was Pakal, and later his sons, Kan Balam and Kan Xul who ushered Palenque into pre-eminence. Much of the art and architecture was commissioned during this time. They also secured political power – waging wars and establishing alliances with the mighty cities of Tikal and Yaxchilan to extend Palenque’s territory to the Gulf of Mexico. However, by A.D. 711 cracks slowly began to emerge in Palenque’s supremacy, leading to its shocking slaughter in battle at the hands of rival, Toniná. Its sudden decline, around A.D. 799, is attributed by archeologists to the widespread downfall that swept southern lowlands in the 8th and 9th centuries. It’s believed that the Maya suffered from a combined onslaught of drought, disease and general deterioration in agricultural production. By the time the Spanish arrived in the 16th century, Palenque had been abandoned. 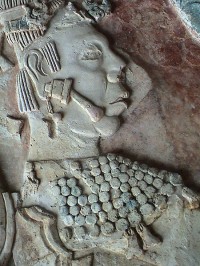 Palenque is not a large site, but its architecture is among the finest of the ancient Mayan civilization.

In 1949, while examining the temple, Mexican archeologist Alberto Ruz L’Huillier uncovered a hidden stairway leading to the depths of the pyramid. After years of excavation he made arguably the most critical discovery of Maya archeology, he found the sarcophagus of Pakal the Great. It was exquisitely sculpted with symbols and glyphs, which illuminated Mayan beliefs on death and its journey. In the museum, you’ll find a decent replica of this crypt, the jewels and artifacts surrounding Pakal’s body and (a copy) of the jade-mosaic mask which covered his face.

Also facing the plaza is the Palace – an elaborate complex comprising the remains of rooms, patios and underground arcades, as well as a sophisticated drainage system. The latter is one element of the hydrological apparatus developed by the Maya to control their water saturated environment. Large underground aqueducts were also constructed to channel waterways beneath the city.

In the northeast corner of the Palace, the Patio of the Captives houses several intriguing carvings of Palenque’s prisoners, while the Patio of the Warrior Chiefs is where military leaders once assembled to discuss matters of security. Finally, the large tower in the center, which is unique among Mayan architecture, may have functioned as an astronomical observation center. 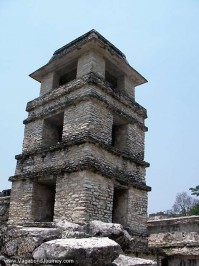 North of the Palace, beyond the Ball Court, is the North Group. Most of these temples are badly weathered, though the Temple of the Count was once the residence of Jean-Frédérick Waldeck in the 19th century. In this section there is also a statue of Tláloc, a deity of Teotihuacán, an ancient holy city of Mesoamerica now in ruins, near Mexico City.

Finally, the Bats Group, possibly a noble residence, and the Queen’s Bath, a picturesque waterfall and pool, are northeast of the Ball Court.

Part of Palenque’s appeal is the surrounding jungle, which is rich with exotic plants and wildlife. It’s not uncommon to sight, or at least to hear howler monkey, especially in the early morning and late afternoon. However, Palenque’s rainforest-like habitat also means rain and humidity. Wear comfortable, sturdy walking shoes and bring something waterproof for cover. Dry season is from November to April, and the rains fall between May and October.

Entry fee is $5 USD and Palenque is open from 8 am to 5 pm, Monday to Sunday. Last entry is at 4:30 pm. The small, but worthwhile museum is open 9 am to 4:30 pm, Tuesday to Sunday. (Note that it’s closed on Monday). The ticket into the archeolgical zone includes access into the museum, so don’t ditch those stubs. If you decide to visit the museum after touring Palenque, exit from the rear of the site, which is just a short distance from the museum. From there, you can catch a combi back into town, or if you arrived as part of an organized tour, you’ll need to return to the main entrance. 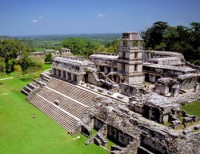 Guided tours around the ruins are not obligatory, as Palenque is well-explained in English and Spanish, both on-site and in the museum. However, for those seeking to enhance their experience, guides are often knowledgable about ancient and contemporary Mayan culture, not to mention that the Chiapanecans (pronounced – chia-pa-nai-kaans) are a charismatic people. I recommend hiring an official guide (easily found hovering around the main entrance), who charge approximately $85 USD for a two-hour tour (for up to seven people) in English.

The archeological zone is located within Palenque National Park, so you’ll also be required to pay a $2 USD admission fee at the park’s entrance near the museum. Palenque is a popular site with a lot on show, so arrive early to beat the crowds.

How to get there:

Because Palenque is relatively remote, most visitors incorporate it into a multi-day stay in Chiapas, or as an excursion from Tabasco or the Yucatán Peninsula. Other nearby attractions include the cascades, Agua Azul and Misol-Há; archeological site, Toniná and colonial city, San Crisótbal de las Casas. To enter Palenque from Campeche or Tobasco, you’ll need to connect from  highway 186 onto the 307, or if you’re coming from San Cristóbal or Tuxtla Gutiérrez, you’ll come up highway 199. There are several accommodation options in the rather un-alluring modern town of Palenque, though most people prefer to stay in the rustic zone of El Panchán.

Ron is the consummate professional and an incredible resource to have for all-things-Tulum and the surrounding areas.  Ron’s in-depth knowledge of, and caring ways for, this magnificent region of Mexico is second-to-none.  If you’re seeking vacation or travel advice for things such as lodging/hospitality/spa’s, restaurants, shopping, beaches, sports/fitness, adventure day-trips to the nearby ruins/fishing/boating/diving/snorkeling/cenotes/zip-lining, 4-wheeling, etc., or need more in-dep… END_OF_DOCUMENT_TOKEN_TO_BE_REPLACED

Ron Burdine made this whole move from Philadelphia possible..their knowledge and organization skills (that I don’t have) helped me create order out of my chaos..there are a million details that are just too much for one person to put in order. At least this one person. We followed Ron’s suggestions and had the secure feeling that we were ready for anything, and we were.. we had insurance, directions, hints, tips and suggestions..we have been here (Isla Mujeres) for 6 weeks and Ron is still o… END_OF_DOCUMENT_TOKEN_TO_BE_REPLACED