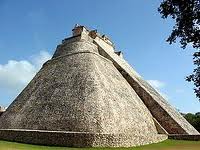 Almost 80 km south of Mérida, the present-day capital of the Yucatán state, is the ruin of Uxmal (OOSH mal), an influential Mayan metropolis of the late classic period (AD 600 to 900). In its heyday, Uxmal’s influence spread across northern Yucatán and included subjugating the neighboring settlements of Labná and Sayil. Today, it is a well-preserved archeological zone, embodying Mexico’s ancient culture.

Buried between hills of dry deciduous forests, Uxmal testifies to the ingenuity of the Maya people to not only survive, but to thrive in a region prone to drought. Attempting to control their own water supply, particularly during the dry-season, the Mayans engineered large reservoirs, or ‘chultunes,’ sealed with lime mortar, used to collect rainfall. A well-preserved example is located near the entrance of the ruins.

The first structure on site is the staggering “El Adivino”, or Pyramid of the Magician. Measuring around 35 meters in height, it’s among the most imposing relics of ancient Mesoamerica. The temple’s unusual elliptical platforms, constructed from delicately cut stones set into concrete are not only beautiful, but also an excellent example of “Puuc” architectural influence, which swept the region near the end of the late classic era. This technique of molding, as opposed to layering large boulders upon one another, was considered an architectural advancement, enabling the Maya to construct sturdy, more spacious interiors. 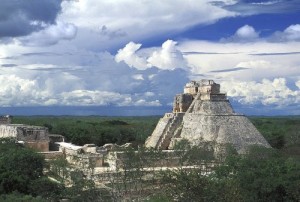 The broad cubic portal on the crest of the base is a graphic example of Puuc art. Its walls are intricately sculpted with geometric designs and Chaac masks, which, even after millennia in the erosive climate, remain aesthetic. The façade is particularly impressive, in that it is fashioned into an enormous mask of the rain deity, his gapping mouth framing the entrance. According to the Mayan folktale, “the Dwarf of Uxmal,” El Adivino was raised overnight by a magician dwarf. Born from a gourd and raised by an old sorceress, the he became ruler of Uxmal after defeating the previous potentate in a challenge, which resulted in his death.

At the step of the temple, the “Cuadrángulo de las Monjas,” or the Nunnery, is a compound of four ornate buildings, surrounding a large platform. Archaeologists theorize that it once functioned as a palace complex. Indeed, each structure is so richly decorated with mosaics, latticework and bas-reliefs, that it’s easy to wile away hours in awe of the sculptors’ creative vision. On the western building, there is a splendid incarnation of the feathered serpent, Kukulkan, which interweaves artwork into the top of the façade.

The Maya were dexterous architects that developed sophisticated geometric structural designs that, not only used their environment to advantage, but also incorporated their theism. Across archaeological sites there are examples of constructions interacting with solar and lunar cycles, as well as seasonal patterns. The corners of each structure in the Nunnery align but do not connect, which facilitates the passage of air through the interior. 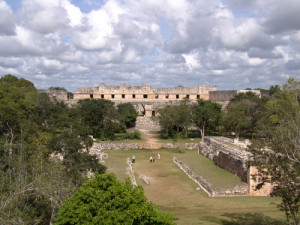 Just to the south are the majority of the site’s excavated structures, including the most prominent: “Palacio del Gobernador,” or Governor’s Palace. This rectangular building is the prize of Uxmal. It’s separated into three sections by two triangular arches, which once served as passageways. Though the interior has partially collapsed, you can imagine the stateliness it once claimed. At the center of the decorated façade is a sculpture of a prominent figure garbed in a spectacular headdress and positioned on the coiled body of a serpent. It is from this mysterious individual that the structure gets its name.

Admission into Uxmal is $150MXN. This fee will also provide entrance into the light and sound show that begins at 7 pm. It’s in Spanish, though electronic translators can be hired from the admissions office. Surrounding the entrance are a small restaurant, serving traditional Yucatán fare, a bookstore and a souvenir shop. Uxmal can be easily visited as a day trip from Mérida.

Ron is the consummate professional and an incredible resource to have for all-things-Tulum and the surrounding areas.  Ron’s in-depth knowledge of, and caring ways for, this magnificent region of Mexico is second-to-none.  If you’re seeking vacation or travel advice for things such as lodging/hospitality/spa’s, restaurants, shopping, beaches, sports/fitness, adventure day-trips to the nearby ruins/fishing/boating/diving/snorkeling/cenotes/zip-lining, 4-wheeling, etc., or need more in-dep… END_OF_DOCUMENT_TOKEN_TO_BE_REPLACED

Ron Burdine made this whole move from Philadelphia possible..their knowledge and organization skills (that I don’t have) helped me create order out of my chaos..there are a million details that are just too much for one person to put in order. At least this one person. We followed Ron’s suggestions and had the secure feeling that we were ready for anything, and we were.. we had insurance, directions, hints, tips and suggestions..we have been here (Isla Mujeres) for 6 weeks and Ron is still o… END_OF_DOCUMENT_TOKEN_TO_BE_REPLACED