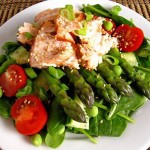 You have probably heard the term “clean eating” by now in magazines and on t.v. shows like Dr. Oz.  but you may be wondering what eating clean really means.   There are levels to eating clean, but it basically means, “if it’s man made, don’t eat it.”

The typical Western diet has evolved into heavily processed, packaged, and fast food.  Just walking into an average grocery or convenience store is like walking through a gauntlet of temptation.  In fact, typically, the very first thing you see when you walk into the grocery store these days is a glimmering, mountainous display of fresh baked pies, cakes and cupcakes.  Following that, there are the glorious shelves of holiday candy, boxed cereals or chips on sale.  If you do happen to make it past the front door without picking up some of these sugary delights, there are the aisles upon aisles of boxed and bagged convenience foods awaiting you concluded with the final plank:  The candy laden check out stand.

What is Clean Eating?

Basically, the movement towards clean eating means that more Americans are paying attention to this barrage of unhealthy, but convenient food, and are wanting to eat food they know is healthier and will make them feel better.  Clean eating means getting back to eating foods that are in their natural state with no preservatives or additives.  It means choosing foods throughout the day that are in their natural state and from the earth.  Foods such as fruits, vegetables, seeds, nuts, whole grains, fish, eggs, chicken, and unprocessed meats.   Eating clean means choosing the most minimally processed foods you can get your hands on such as:

Different Levels of Eating Clean
Some people look at eating clean as simply giving up foods with processed sugars, chemicals or colorings, while some people go so far as to only eat one food item at a time so that all of the nutrients are absorbed before adding another food item.  An example of this would be to have cooked oats for breakfast, followed by an apple, followed by some almonds, followed by a banana, ect.  This group typically give up sauces and eat primarily foods in their raw state.
Benefits of Eating Clean
Eating clean leads to better digestion.  Clean foods, unlike processed foods, are loaded with natural enzymes and fiber that help with digestion.  The human body “recognizes” real food and is able to digest it much better.  Sometimes the human body just doesn’t know what to do with all these chemicals, and stores it as fat.  Eating whole foods will also help decrease inflammation and improve circulation which helps the body remove waste.
The high-fiber, less processed carbohydrates found in whole grains, vegetables, and fruits are low glycemic index carbohydrates.  This means that the sugar found naturally in these foods is released more slowly which helps you regulate your blood sugar levels and maintain energy.  You won’t get the “sugar high” from eating an orange as opposed to a donut, but the sugars in an orange will keep you fueled for hours.
Tips for Eating Clean

Most importantly, eating clean does not mean you have to go hungry.  Stay on top of keeping whole foods in your home, in your purse and at the office so that you are not tempted to buy something you really don’t want.  You can easily take bags of baby carrots, almonds, walnuts, raisins or an apple where ever you go.   Eating clean can be a major transition for  people addicted to sugar and processed food, but don’t give up.   Soon enough, you will look forward to eating clean, and the long-term health benefits are worth it.

Mexico on My Mind made this whole move from Philadelphia possible..their knowledge and organization skills (that I don’t have) helped me create order out of my chaos..there are a million details that are just too much for one person to put in order. At least this one person. We followed Ron’s suggestions and had the secure feeling that we were …

Mexico on My Mind made this whole move from Philadelphia possible..their knowledge and organization skills (that I don’t have) helped me create order out of my chaos..there are a million details that are just too much for one person to put in order.

The team at Mexico on My Mind are consummate professionals and an incredible resource to have for all-things-Tulum and the surrounding areas. Ron’s in-depth knowledge of, and caring ways for, this magnificent region of Mexico is second-to-none.

If you are visiting or planning to relocate to Mexico or interested in real estate in Tulum, I highly endorse working with Mexico on My Mind and Ron. As a long time expat he understands the needs and desires of those traveling to the area for a vacation or looking to relocate to the area. You will be in great hands with Ron. Feel free to contact me…

Mexico on My Mind was instrumental in helping us choose a location that meets our wants and needs. The information is not routine but personalized for you. They take the time to understand exactly what you need. Location, real estate, banking, shopping, beaches, etc. These people know it all. We did not have the time or money to figure out what wo…

If you’re seeking relocation, vacation or travel advice for the best locations to live or visit in Mexico you are in the right place! If you are looking for lodging & hospitality, spa’s, restaurants, shopping, beaches, sports/fitness, adventure day-trips, fishing, boating, diving, 4-wheeling or need more in-depth advice regarding regional cultura…

We can truthfully say that were it not for Mexico on My Mind and Ron’s sage guidance and advice, we would not have made the decision to buy land and build a house in Mexico. We have had not a single regret. It is simply paradise and Ron is one of the angels. So is Catherine – and she is much cuter. – Thomas M. Bayer, PhD. & Laura D. Kelley, PhD. – …