Sombreros and tequila may be what first comes to mind when we think of Mexico, but it’s the colorful colonial cities which are the foundation of contemporary Mexican culture and in the highland hub of San Cristóbal de las Casas, you’ll find its beating heart.

Located in the southwestern state of Chiapis, it’s in the central plateau of the Sierra Madre de Chiapas and close to the

geographicalcenter of the state.  San Cristóbal sits at 2200 meters elevation, so expect cool nights, particularly from November to April, and rain. Some people experience altitude sickness – tiredness and mild flu-like symptoms at such heights, so it’s is a good idea to plan to spend, at least, four nights so that you’ll have two full days for cruising the city, and another day to visit nearby communities.

Though it’s now peaceful, San Cristóbal’s history is replete with confrontation.  Often manifested as episodes of extreme repression by the colonizers with concomitant resistance by the indigenous natives.  The most recent political storm erupted in January 1994, when the masked members of the Zapatista National Liberation Army (EZLN), a leftist guerrilla movement, stampeded the city and seized control of government buildings. They demanded rights for the indigenous, a battle cry that has resonated since the arrival of the Spanish.  The Mexican Army soon forced them back into the mountains.

The city was founded as state capital in 1528 by Diego de los Mazariegos, following a brutal battle with the dominant Maya group, the Chiapa, who fought with a passion to protect their autonomy.  Its original name was “Villareal de Chiapa de los Españoles,” though it was renamed “San Cristóbal de las Casas,” in honor of Bartolome de las Casas, the first Bishop of Chiapas, who spent 50 years fighting for the rights of the native Maya. As far as the colonial elite of San Cristóbal were concerned, however, the native Maya would receive no rights or even consideration as human beings.  The colonists set to work breaking the spirit of the indigenous natives, enslaving them in a network of plantations known as the encomienda. The Spanish colonists grew rich harvesting wheat and coffee, while the Maya suffered from famine and diseases which decimated their population.  However, by the time of Mexican Independence in 1821, San Cristóbal was no longer a seat of prosperity.  It had been undermined by its highland location, which isolated it as the lowlands grew wealthier from agriculture.  It was replaced by Tuxtla Gutierrez as state capital.  And, it remained in obscurity until the 1970s, when it was discovered by the tourist industry.

While in San Cristóbal, the following are some of the places you do not want to miss visiting: 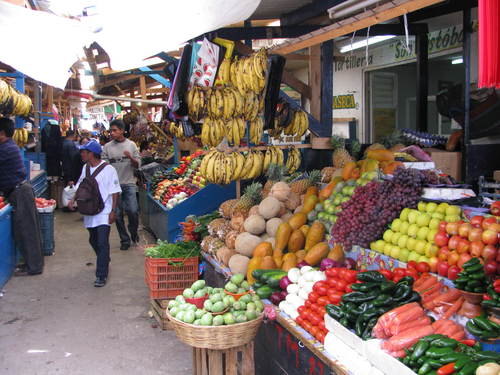 El Andador : The main thoroughfare, known informally as “El Andador,” cuts through the core of the city, and is the place to start your exploration.  It’s a pedestrian walkway, stretching from the south on “Avenida Miguel Hidalgo,” through the main plaza, and north along “Avenida 20 de Noviembre,” to Santo Domingo church.  It’s flanked with many shops, galleries, restaurants and bars and you’ll likely spend most of a day wandering up and down its ten block length.

El Zócalo: (or, the main plaza) is the pulse of San Cristóbal. By day, it’s humming with workers, vendors and tourists while, at night, it’s the heart of the city’s night life with live bands.  It is particularly picturesque at sunset when the mustard yellow facade of La Catedral de San Cristóbal radiates like a beacon in a sea of mountain peaks.

El Museo Na Bolom: If you only visit one museum, it must be El Museo Na Bolom ($3 US, 10 am – 7 pm daily). Found  33 Avenida Vicente Guerrero, this former home of Danish archaeologist, Frans Blom, and his wife, photographer Gertrude Duby-Blom is an elegant former monastery, complete with stone floors, courtyards and a garden.  The Bloms occupied it from the 1950s to the 1980s. The couple is renowned for their contribution to the study and protection of the Lacandón rainforest in eastern Chiapas, and among the exhibits is a rare collection of photographs taken by Gertrude of the Lacandón Maya, who lived in almost complete isolation until the 1990s.

features a small gallery of exquisite amber sculptures.  Chiapas is the only region in Mexico where amber is found.

Templo and Ex-Convento de Santo Domingo de Guzman: Looming above the artisan market north of El Zócalo is possibly one of Mexico’s most splendid churches.  Its baroque details and ornate façade, richly decorated with carvings and columns, create an intriguing contrast with the colorful motifs of indigenous textiles being sold below.  In the former monastery, there is a showroom of Sna Jolobil (9 am – 2 pm; 4 pm – 6 pm Monday to Saturday), a Mayan weavers’ co-operative renowned for its craftsmanship.  Prices range from a few dollars up to a couple of thousand.

TierrAdentro: On “Real de Guadalupe,” this mercado is run by Zapatista affiliates, an obvious favorite of political lefties, and people keen on Che Guevara t-shirts.  It’s in a large indoor courtyard surrounded by

stalls selling crafts, memorabilia with the EZLN logo and, if you’re seriously interested, military boots.  It frequently hosts interesting events. The cuisine is Mexican and the dishes tasty and inexpensive.

For a moderately sized city nestled in the mountains of western Mexico, San Cristóbal has a surprisingly eclectic collection of restaurants and bistros.  Cuisine options range from basic Mayan fare to Mexican street food, Argentinean steaks, and even Thai curries.  For a splurge dinner, try El Argentino, on “Guadalupe.”  It’s a steakhouse offering delectable cuts of meats, but at premium prices.

Nightlife is equally diverse. If you’re seeking jazz worthy of New Orleans, you’ll like Dada Club Jazz Bar & Cafe on Avenida Insurgentes, around the corner from the Santo Domingo church.  Each night the stage is rocked by four or five bands.  It’s packed by 11 pm, so arrive early if you want a good spot.  Beer is reasonably priced around $2 USD, and there’s a menu of appetizers and small plate meals.  Alternatively, La Viña de Bacco on Guadalupe is an intimate wine bar where you can unwind and people-watch with a soothing cup of “mold” wine.  Prices start from around $4 USD.

For a place to stay, Hotel Parador Margarita on Avenida Felipe Flores provides good value.  It has large comfortable rooms that are set around a lovely garden.  But, it’s the elegant bathrooms with showers boasting hot water (24/7) and good water pressure that you will appreciate most.  Doubles are $65 USD.

Ron is the consummate professional and an incredible resource to have for all-things-Tulum and the surrounding areas.  Ron’s in-depth knowledge of, and caring ways for, this magnificent region of Mexico is second-to-none.  If you’re seeking vacation or travel advice for things such as lodging/hospitality/spa’s, restaurants, shopping, beaches, sports/fitness, adventure day-trips to the nearby ruins/fishing/boating/diving/snorkeling/cenotes/zip-lining, 4-wheeling, etc., or need more in-dep… END_OF_DOCUMENT_TOKEN_TO_BE_REPLACED

Ron Burdine made this whole move from Philadelphia possible..their knowledge and organization skills (that I don’t have) helped me create order out of my chaos..there are a million details that are just too much for one person to put in order. At least this one person. We followed Ron’s suggestions and had the secure feeling that we were ready for anything, and we were.. we had insurance, directions, hints, tips and suggestions..we have been here (Isla Mujeres) for 6 weeks and Ron is still o… END_OF_DOCUMENT_TOKEN_TO_BE_REPLACED